Yesterday saw the second major day of protests by disabled people in the Hardest Hit campaign, following the first organised last May. Disabled people from around the country and from almost all disability groups met at 14 places to make their voices heard. It is almost unheard of for so many disability organisations to unite so unanimously in this way. Indeed it is jokingly said that the only achievement of Maria Miller, minister for disabled people, has been to unite disabled people and organisations in a way that has never been seen before.

Although the number of people marching may appear small when compared to other demonstrations such as those against tuition fees, it must be remembered that for every person marching there are hundreds unable to, either because they are too ill or perhaps because of accessibility issues. I am one of them. Many disabled people are invisible and the general public and indeed the government must be reminded of this. These protests show just how bad these benefit reforms are and how scared disabled people are.

But although there was some small media coverage, most of the attention was directed elsewhere. Worse, promised interviews were cancelled at the last minute. Sue Marsh, a now well known disability activist, due to appear on Radio 5 had her show cancelled. I myself had my own telephone interview stopped.

When a single benefit cheat is discovered the media fall over themselves to splash it over the front pages. When thousands of scared disabled people take to the streets telling their stories of a broken and faceless system which is set to get even worse, there is barely a mention of it.

As an example, the Sunday Mail got into trouble for falsely claiming that thousands of children with ADHD, which they called "naughty child syndrom" got free cars though the motability system. Although they printed a correction, it is that headline which will be remembered.
Worse, they may have played a role in the change to motability rules which will have a huge negative impact on thousands of disabled people. This is what they reported on instead of the disability marches yesterday. Furthermore they referred back to their original ADHD claims without mentioning that they had been false.

The media continually prints that the government says their only goal is to make sure that the money goes to those who need it most. The fact that they are making a 20% cost cut or the fact that  people like myself, who receive the highest disability awards and are in the government's own words "the most vulnerable", face a £30 per week cut, 20% of my income, is never mentioned.

The government has much to answer for. They broke and are breaking the promises they made to protect disabled people. But the media also has much to answer for. They shape public opinion. They are the ones who control what the general public knows. What is the point of disabled people knowing the truth if it is impossible to let everyone else know? The media has a duty to inform. They are failing in that duty.
Posted by Spoonydoc at 06:05 No comments:

Although I value my independence and would not live my life any other way, there are times I feel a little lonely with just my fish for company. Ideally I would like a dog but that is impossible for both practical and tenancy reasons.

I have however returned to childhood and bought myself a little hamster. Well, I say little... As far as hamsters go, he is an enormous fat fluffball. But don't tell him I said that.
Hmmmm.  I should probably also keep it a secret from ATOS, the medical company who determine if you're fit to work, who reputedly think that if you have pets you are fit to work. (It really is a question they are told to ask claimants!)

Yesterday saw me engaged in an epic battle of wills with Chewbacca (Chewy for short), who suddenly decided that sleeping in the comfortable snug house at the bottom in the cage was a bad idea and he would instead make his bed inside the plastic tunnels meant for exercising.
Ignoring the laws of gravity, he carefully carried his food and bedding all the way to the tunnel and left them there to go and fetch more, whereupon they promptly fell out. I would gather them up and put them back in his bed, but to no avail.
He eventually fell asleep in the tunnel, falling out onto his head half way through the evening. I'm still wondering whether this will knock some sense into him or cause irreparable brain damage.

Throughout this frustrating battle I couldn't help but be reminded of how I feel at the moment with the government. Take something that works and stubbornly try something different which quite obviously will not.  We fight against it with all our might, knowing that if we don't something bad will happen.  Right now I'm just waiting for the government to fall out of their own tunnel onto their heads.

The only difference is that in Chewy's case the only person hurt was a little (ok, fat and fluffy) hamster. With the government it will be thousands of disabled people. Maybe we all need to be issued with hard hats. 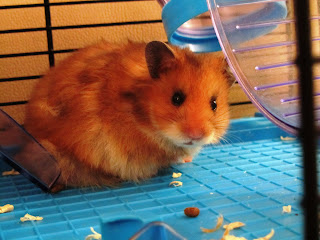 Posted by Spoonydoc at 03:07 No comments:

Rolling Round About, my Wheelchair Walks Blog

Spoonydoc
I was a university mathematics researcher until increasing disability and illness forced me to give up my career. After seeing the erosion of the support which had enabled me to go to uni, do a PhD and hold down a good job, I turned to disability activism for a while and wrote the Spartacus Report. I continue to blog when I can and rant about dodgy lies and stats and disablism. When not being terribly serious I like games, sci-fi, fish, small furry critters and kids.

image shows a square containing the title "Blogging against Disablism" and a colourful 5 by 4 grid with stick figures, one of which is holding a walking stick and another is a wheelchair user